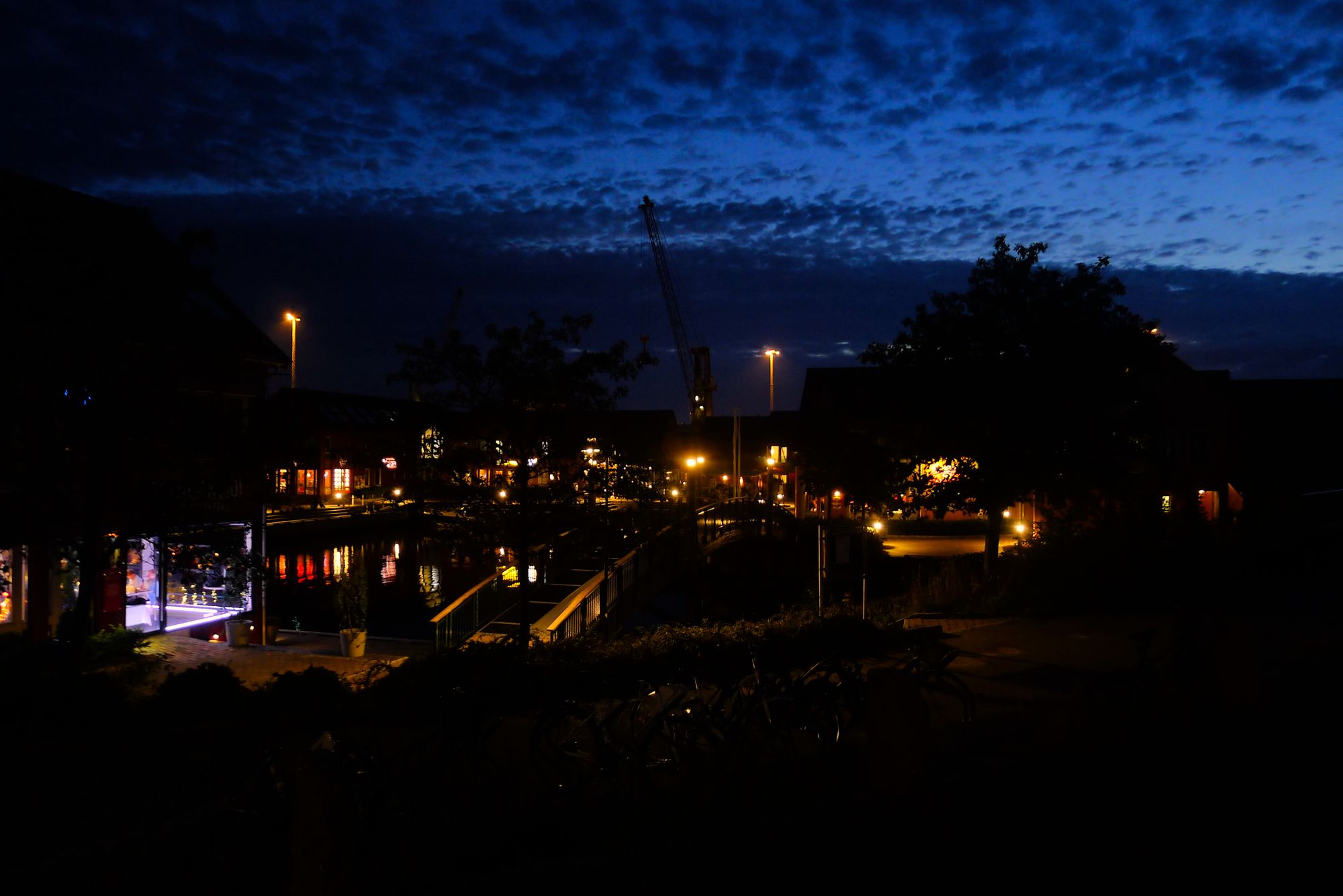 She got soot on her soul. She accepted the deal. The soot festered. “Progress,” she thought to herself, “is a dirty affair.” She looked back on the deal of progress.

– First my hands, then my body, my head, my heart, and now my soul. How I am covered in soot. Everything I touch, I cover with soot. Everywhere I move and lie, I leave traces of soot. All my thoughts, now they are covered in soot. My heart still beats strong, but it cannot beat strongly enough to shake off the soot. And now, it is complete. There is soot on my soul.

She struggled. The river flowed around her. It did a lot of the cleaning for her, the flow. However, it was cold. She constantly fought her own will to escape the cold, with her other will to wash herself. “If only,” she said to herself, “the water could be warm, the winter no worry, food abundant, and material overflowing! Oh, how humanity should have prospered in this progress.”

A tall, dark figure appeared. It had a cape from its jawbones to the ground. It did not walk so much as glide over the earth. Deep orange eyes, tending towards a threatening yellow, burrowed themselves on her naked body. It spoke:

– For your wish to come true, I require only this of you: touch me with your hands, and I shall grant you that which you want.

It took little time, this first deal. She reached out, and touched the figure. The soft and grainy feeling underneath her hands did not feel reassuring. It felt like regret. She took her hands to herself, and saw that they were covered in soot. Her hands left a shine on the figure. Where her hands had been, it was no longer so dirty. It was still menacing, but it was clean.

It spoke: “Your reward.” Its voice was slimy. It reached out a hand and pointed in front of her. A loaf of bread. “As long as you look after it,” it said with a low and hissing voice, “you shall starve no more.”

She picked up the loaf of bread, and took a bite. It was slightly sweet, soft, and did fill her up. When she put the bread down, she noticed handprints of soot on it. She dipped her hands in the river, but they did not come clean. “To wash your hands,” the figure said, approaching her slowly, “you must relinquish progress.”

She looked at her hands, the loaf of bread, the water, then finally on the figure. “No,” she said after a minute of meditation, “I shall simply be more careful as to where I put my hands. This was a good deal. This is progress.”

– I offer you another: all you must do is press your body against mine.

– And what shall I have in return?

Her reply was quick and hopeful. The figure took a few deep breaths of ecstasy, and wheezed: “Progress.”

She stepped out of the water, which ran over her. She had almost forgotten the cold of the river. Almost. She approached the figure. The soft and grainy feel embraced her body. It did nothing, remained completely still. She rolled onto it. Then stepped away, and looked down. Her whole body was now covered in soot. The figure pointed to the river: “Wade into the water.” She did as instructed, not looking forward to the coming cold. To her astonishment, no cold came, but a warmth. This warmth did not wash the soot away, neither from the hands, nor the body. She smiled: “This is progress. This was a good deal.”

“There is more.” The figure wheezed, now shining more brightly, but nevertheless in a menacing manner. At this point she did not even think, the bread and the hot water had already convinced her. “But I have already covered my whole body, what could I offer now?” The figure hummed a slithering tone, and replied: “Your faculties; your thoughts; your head.” She frowned her eyebrows: “My head?” “Not as an offering”, the figure reassured her, “but open your ears, open your mind, and you shall receive.” Her frowned lightened: “Receive what?” Its eyes seemed to glow: “Progress.”

So she did. The figure approached her, and whispered something inaudible in her ears. A soundless sentence. A wordless worth. The soot entered her head. She could feel it covering her thoughts. That dark soot, in her most private of places: in her head.

The figure leaned away. She looked at it hopefully, and it pointed down. “A book!” She said excitedly. She picked it up. Its title: Information. She opened it, and with just a few sentences, she was enthralled by facts. “This was a good deal.” She said while reading and nodding. “This is progress.”

“What next?” She asked, before the figure could even present her with it. It took some time, and once again its eyes glowed in that menacing orange. “The heart. I must touch your heart.”

This shocked her. Something so precious. It made her think: “My heart? But my heart is my purest place, my safest security. It is where I retreat, not to resolve, but to come clean.” Her thoughts turned into words: “What shall I have in return?” The figure glided back, and spouted out: “The ability to love every thing. Progress.” She felt the wrong in this, and her heart pleaded. However, the thoughts in her head, covered in soot, lead her to pondering what this would give her. Not rely on a man, to love a thing instead. Is it liberty?

Her soot-covered arm raised, and she grabbed her clean heart with her soot-covered hand. So did the figure, and it rubbed its own sooty heart against hears. That menacing shine of its body and eyes suddenly appeared on its heart. While hers, so pure just a moment ago, was now covered in soot.

She looked at the bread, the water, and the book, and what she felt astonished her. These things: she loved them. And she thought: “This was a good deal. This is progress.”

The figure’s voice wheezed once again: “The next deal, is the soul.” Her soul despaired, but her hands did not fight. Her body did not stutter. Her head did not think. And she loved it.

She got soot on her soul. She accepted the deal. The soot festered. “Progress,” she thought to herself, “is a dirty affair.” She looked back on the deal of progress.

– First my hands, then my body, my head, my heart, and now my soul. How I am covered in soot. Everything I touch, I cover with soot. Everywhere I move and lie, I leave traces of soot. All my thoughts, now they are covered in soot. My heart still beats strong, but it cannot beat strongly enough to shake of the soot. And now, it is complete. There is soot on my soul.

“You shall now see,” the now almost fully shining figure said, “progress itself. It shall appear clear to you.” She replied: “Surely then,” the soot festering in her being, “this is the end? Progress is mine.” “No,” the figure replied happily, “for to advance further, to the final step, you must not own progress: you must be one with it. Not on your soul, but in your soul.” Before it could draw a breath, she replied: “Do it. This was a good deal. This is progress.”

“Now, I am progress.” Her heart, covered in soot, but not penetrated by it, pleaded with all its might. It produced an emotion in her, and she voiced it: “However, was this a good deal?”