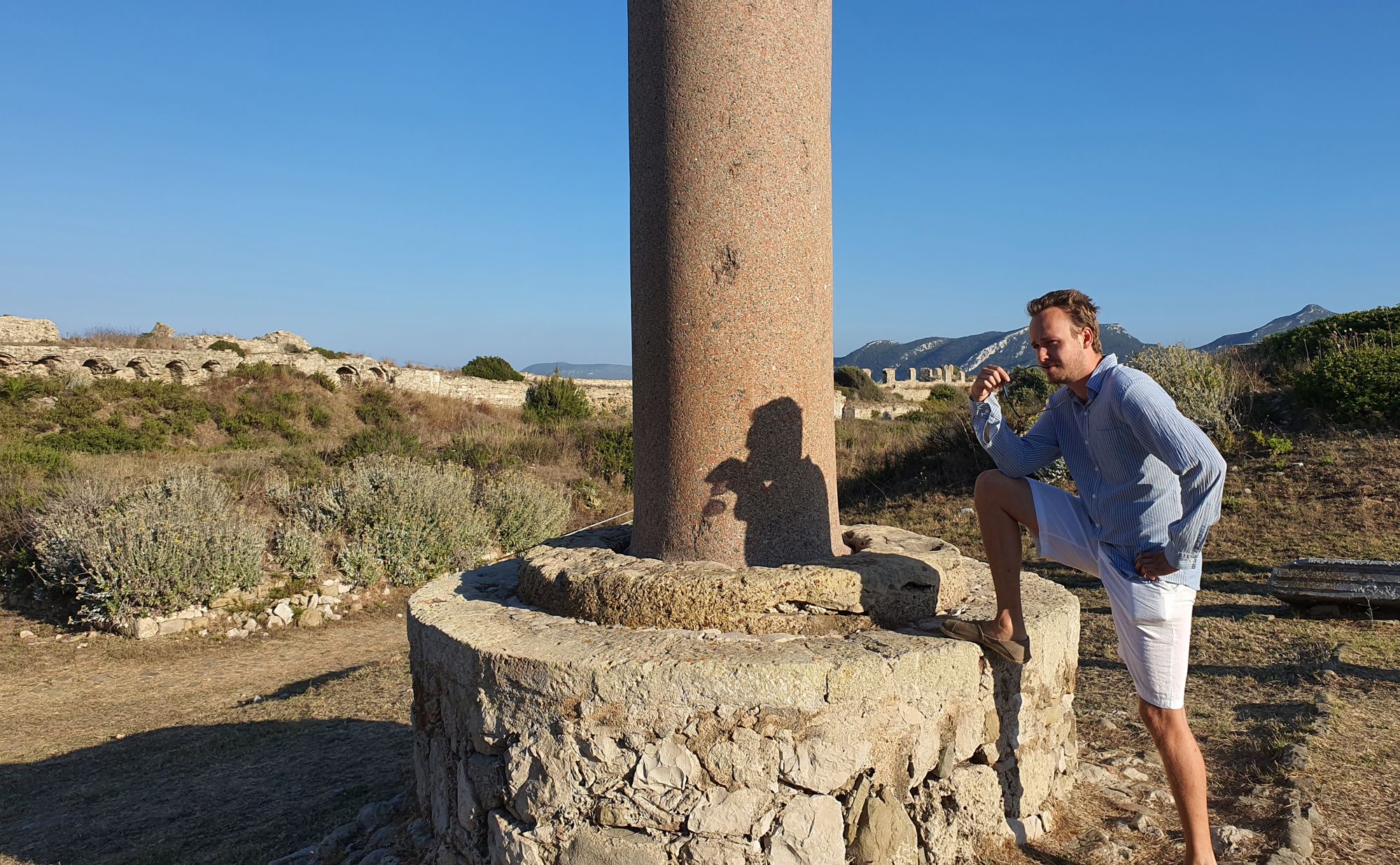 It dawned on him. He realised it fully now. It filled him with only one emotion: Despair. His defence speech at the trial had not persuaded the jury. And he himself chose death over exile. “Leaving Athens, the only place with free speech, is worse than death.” he thought to himself. Now though, his mind is struggling to make peace with his own mortality, which he knows he will face soon. He tries to do what he always does; reason: “If I die, and I am dead, I will not realise it. If there is some sort of afterlife, I will be positively surprised. Either way: There is nothing to fear.”

This monologue in his mind did not give him the same satisfaction as a conversation. Alas, it did give his soul just enough peace to drift off into slumber. Knowing full well that when he woke up, he had but one, final appointment.

Blinding light awoke him. A strong, increasingly loud noise too. This light blinded him even through his eyelids. Facing the wall, he tried to turn around, but all he could see was white. “Are you gods who have come to take me?!” covering his eyes from the painfully bright light. The noise was of the strangest kind. “Could this be the music of the gods?” he thought to himself.

Suddenly: Darkness. Silence. Apart from the ringing in his ears. He became curious: “Has the sun died?” His eyes still adjusting to the darkness of the night, he could hear a voice speaking to him: “Socrates, are you ok?” What a strange accent it was! Not Italian, nor Sicilian. And not Persian either. “Yes!” he replied, “I am here.”

“Stay where you are!” The strange accent interrupted him just as he was about to ask them. “We will come to you, and guide you to us. Please do not fight, there is not much time.” Soon he felt strange hands on his arms, lifting him gently, but steadily in a direction. It all happened so fast. He felt ground under his feet. Colder. Like a sword. Metal. He was sat down, and strapped to a chair. Tightly. His eyesight was somewhat functional now. He never expected to see this: People. They spoke. A barbaric language. Nothing he could understand. Now they all sat down. “What n...” An enormous pressure forced him down, everything was shaking, the noise returned, his consciousness was being pulled away from him, and there was nothing he could do. He was forced into sleep.

He woke up again, feeling disoriented. His body had taken some punishment. “Am I a soldier again?” People again. They looked at him. Confusion upon their faces. So much white. And these stones. So shiny. “Must be marble.” But there were moving images on them! “Stones of the gods. I am dead.” A woman rushed into the room. Stopping abruptly by the side of his bed. “Socrates, how are you feeling?” That strange accent again. “I feel like a soldier after a fight. Tell me, where have you moved me?”

The woman took a deep breath and locked eyes with him. “Well, we have not moved you in the traditional sense. We have moved you through time. 2415 summers and winters have passed, Socrates. We call these “years”. Your lifetime has gone by 34 times without you. You have travelled through time, and the year is 2016. Do you understand?”

He lowered his eyebrows. Puckered his lips, and stared off into nothing for just a moment. He replied: “Is this the same bed you found me in?” Confusion dawned on the face of the woman. Everyone looked to her, anxiously awaiting a reply. “No,” she said, “it is not the same bed.” The crowd turning to Socrates. “I thought as much.” Socrates replied. “Then how can I have ended up in this bed, if I have not been moved? Reason defies this, does it not?”

A moment went by. A smile slowly crept up on her face. She turned to her colleagues: “We got the right one!” The smile contaminated the rest of the room, except for Socrates who was simply confused.

He was to rest that day, and watch far away vision, or television. The next day he was woken early, he had his most flavourful and extravagant breakfast ever, accompanied by the only woman who spoke the same language as he did. He spoke:

- Yes, we have been looking for you specifically. It is quite a miracle that you are here.

- Very well, but I do not know yours.

- My name is Sofia. It is a pleasure to meet you.

- Oh how I love you, Sofia. And what do you plan to do with me, am I your prisoner? Is this Athens?

She went on to explain the differences of their circumstances, their eras. How technology has vastly improved our lives and decreased our suffering. How war is at an all time low, and how it doesn’t feel like it because media has war in it’s spotlight. “Today, I will show you some of humanities greatest achievements, and after that I will pose you a question, which we all believe you will be best qualified to answer.” “How interesting!” he vigorously replied. “We must get to it at once!”

“The first I wish to show you is already all around us: Electricity. Nikola Tesla and Thomas Edison are those credited for this. It is energy in the form of electricity, of lightning. You might say the power of Zeus runs through our streets, apartments and houses like veins, powering them and bringing them to life. This power has been instrumental in most of our other achievements, allowing efficiency in labour and arithmetics, and increasing our worldwide well-being.” “Yes,” he replied wondrously, “Zeus was to be defeated by man after all.”

“This is a rocket. It is a vessel for people, star sailors, astronauts, which uses enormous amounts of energy to blast off into the sky, leaving the earth. We have actually landed on the lunar surface. It is a cold and dark place, like another reality, and it is yet to be colonised.” He was about to inquire before she interrupted him: “There are many things you still may not understand, such as planets, gravity, and space, but I ask of you kindly to bear with me. These things would take much more than a day to explain, and you will be informed, eventually.” “Usually I would decline, but for you my dear Sofia, I accept.”

They went on to see the Eiffel tower, aeroplanes, cars of all kinds, virtual reality and the large hadron collider. Sofia felt an enormous sense of pride as she realised herself all the feats and accomplishments of humankind. Proud that she could call this her time, how immense the progress from Socrates’ time was. How far they had come. With a frown on his face it was clear to Sofia that Socrates was flexing his cognitive muscles, trying as best he could to understand this strange world she called her own. But suddenly, a smile crept up, and he started giggling.

“I see now, my dearest Sofia I see how you have done this. These magnificent achievements, as you call them, I see how you have presented them to me. In order of the least impressive, to the most impressive! Sure, all these achievements are great, but they are achievements of the advanced carpenter, the builder, the… how do you call it? The engineer! What you have shown me now is simply the triumph of the engineer. I know what is at the end, you truly have saved the best for last, and I must say that the wisdom you are about to grant me will be of incalculable value.”

Sofia was puzzled, this was the end of their tour. Now awaited the question she wished to pose him, but her curiosity took over: “So, what is it you think is the grandest piece?”

“Surely, that is next! Yes, here you are unlocking the secrets of our world, but these secrets are again, important for the engineer, for the next big house, the next big vessel, the next planet. No, what matters to us is not just the feats of the engineers, but of humanity as a whole. So tell me, my dearest Sofia, in these 2415 summers and winters you have had, humanity has had, since my time, visiting new worlds and discovering the fabric of the universe, what is the secret to the good life? Yes, tell me now! What are all the ethical secrets I strived so to try to unveil, how is a good and just state, and how is a good and just man? Tell me now my dear Sofia, I am dying to know!”

He was gleeful. Smiling. Excited to be showered with wisdom, but as Sofia searched her mind for this wisdom, she knew there was nothing to tell him. “The ethical secrets are perhaps better hidden now than before.” she thought to herself, “We have all the resources we need to end suffering, still we put each other through hell.” Her face was empty. Expressionless. Sombre. The high she felt from her pride of these achievements was flipped upside down, and now she was realising the emptiness and shallowness of it all. Her voice was low and full of disappointment.

“I do not have them, Socrates. That is the very question I wanted to ask you.”